About the Get America Singing … Again! Campaign

NAfME’s Get America Singing … Again! campaign, launched in 1995, aimed to establish a common song repertoire and promote community singing. The songs selected for the campaign can be found in the Get America Singing … Again! collection, published by Hal Leonard, and are designed for both home and community singing and standards-based classroom lessons.

From the April 1995 Foreword

If there’s a human race still here in the 22nd Century, I believe we’ll learn the fun of singing again. To take a lung full of air and push it out with some kind of song is an act of survival, whether you’re singing in a shower, a car, a bar, in a chorus, at a birthday party, at a church, or whatever. Try it—you’ll live longer.

Of course, it’ll be much harder to find songs all folks want to sing together, but that’s alright. Little by little, we’re learning to like each other’s songs and getting less enthusiastic about killing each other. And if there’s still a human race here in 100 years, it won’t be because of any one big organization, whether a big church or big political party, a big corporation or country, or even a big UN. It will be because of millions upon millions of small organizations: Save This. Stop That. We’ll disagree on so many things it’ll be funny. But we’ll agree on a few main points, like:

Rachel Carson’s landmark book, Silent Spring, raised the specter of a spring where birds, killed off by pesticides, did not sing anymore. Well, today many of us are starting to worry whether people are singing anymore. We meet increasing numbers of adults who call themselves “non-singers,” children who enter kindergarten without having experienced family singing, and teenagers who would rather slap on earphones than sing. What is at stake here is not just singing, but the very spirit of community in our towns, our cities, and our nation. But … something can be done about it, and this book is a response to that need.

In April, 1995, NAfME invited representatives of other organizations—The Society for Preservation and Encouragement of Barbershop Singing in America, Sweet Adelines International, and Chorus America to meet with us to discuss singing in America. After considerable discussion, we decided to launch a campaign to Get America Singing…Again!

The campaign has two main objectives: the first of which is to establish a common song repertoire that “Americans, of all ages, know and can sing.” We need some songs that everyone can sing, not just the good old traditional songs, but copyrighted songs also. This book is a result of a year-long process of sifting through lots of great songs. Some of your favorite songs may not be included, but we had to start somewhere, and this is the result. Keith Mardak, president of the Hal Leonard Corporation, then volunteered to help with this project by publishing the books and returning a portion of the cost of each book to the Get America Singing…Again! campaign.

The campaign’s second objective is to promote community singing. This includes encouraging audience singing at concerts and recitals, opening or closing public gatherings with a song, and encouraging singing at clubs, private meetings, and in homes. We need singing leadership from Americans in all walks of life…school and church leaders, club presidents, elected civic leaders, radio and TV personalities, camp and scout leaders, and people who
get together socially.

So, why not make your own plans to build up the common life of singing in your community? Plan now to include some audience participation at a concert or other public event. Throw in a song or two at the beginning of a meeting to melt the ice and get communication going. Restore the fun of camp singing next time you gather a group around the fire. Get out the guitar, sit down at the piano, tune up the Autoharp, add a bass, drums, or any other instruments you can lay your hands on, and have a sing-along. Think how you can be a positive agent for change; see how singing can add so much to life together on this planet. People will bless you for including them in the power of active music making through singing.

Use the songs from Get America Singing … Again! in your classroom with standards-based lessons from My Music Class, NAfME’s lesson plan database.

How to Purchase a Copy of Get America Singing … Again! 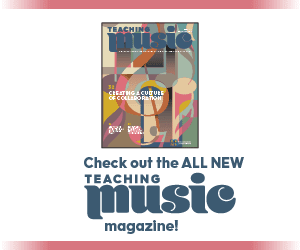