The ELL Student in the Guitar Classroom

Guitar classes in public schools are growing in popularity. More and more students are choosing to enrich their education with music studied on the guitar, and as a result, more schools are offering guitar to fill this need. As in all educational disciplines, guitar instructors are required to offer their pedagogy to students with a variety of backgrounds. Often, instructors teach students who are considered English Language Learners (ELL). The term English Language Learner, as used here, indicates a person who is in the process of acquiring English and has a first language other than English. Teaching students whose primary language is not English requires an instructor to have strategies in place that address their needs. Guitar instructors throughout the country have expressed to the NAfME Council for Guitar Education a need for information about teaching English Language Learners. Being from a very diverse state, Dr. Ricardo Paz and Eduardo N. Trujillo, both representatives on the NAfME Council for Guitar Education, were asked to co-write an article to offer information and strategies to help with this most noble endeavor.

The first half of the article, written by Eduardo Trujillo, describes two general teaching strategies to help reach all ELL students, non-specific to a particular language. The second part of the article, written by Dr. Ricardo Paz, showcases how Spanish-English visual aids can serve as an effective resource for students in a Spanish/English Dual Language Guitar Class. Many may know that the Hispanic population is the second most populous ethnic group in the United States, so leveraging the students’ home language of Spanish will make learning meaningful. Globally, students need to learn the basic Spanish guitar terminology in the same way we learn the Italian terms for music concepts such as dynamics and articulations. For example, in any music classroom the Italian term forte is forte, just as the Spanish term rasqueado is used universally as a specific guitar technique.

The Word of the Day

There are many things you can do to establish a culturally and linguistically inclusive classroom culture. One student-centered strategy that I’ve incorporated is the “The Word of the Day” activity. This is a very simple thing to do and is fun for most students. If you have some free space on a whiteboard or chalkboard (yes, I still use one), simply choose a vocabulary word that relates to a current lesson or concept and have any willing student write its translation in their language(s). I allow the use of reference tools if needed, and explain it is okay to use or need this assistance.

It is common for my students to apply languages they are learning in school like Spanish, English, and French. However, this activity provides an opportunity for the languages that receive less attention to have an equal space in the limelight. I have had students contribute languages such as Mandarin, Farsi, Russian, or Diné (the Native American language of the Navajo Nation), and I feel this atmosphere of multilingualism really enriches our classroom culture by promoting a sense of pride among the students. Once the list is established, I model the incorporation of the varied terms into our class discussions. I may make mistakes pronouncing new words, for example, but when students observe me attempting it, it gives them permission to speak and teach in another language. And, where there is an atmosphere of respect, the students’ affective filters (Krashen) will be lowered, and deeper learning will take place.

I believe teachers, especially music teachers, must model risk-taking and mistakes, whether with languages or playing guitar because it is part of the learning process. Allowing mistakes to happen is not the same as accepting low standards. Through making mistakes and correcting them, we are able to refine ourselves so that we can achieve high standards.

Incorporate as many different languages into all parts of instruction, including ensemble routines, lectures, and music lessons that address historical, societal,
and cultural context.

An extension of Strategy #1 would be to incorporate your classes’ linguistic and cultural diversity into other aspects of your teaching. The beginning of the year is a great place to establish an ecology of learning. Just as everyone will be learning the language of music and guitar—specifically, from you as the teacher—the students will have the opportunity to teach and learn from each other. This may be in the form of peer mentoring, student sectionals, or students offering vocabulary in different languages. By modeling the learning of new vocabulary, you can emphasize how one can communicate with a larger group of people and be more globally competent.

With this philosophy in mind, a great student-centered exercise is learning to count to ten in a variety of languages. For example, in my guitar class, we stretch as a class before we do warm-ups. For every stretch that we do, we hold the stretch for 10 seconds. Students are chosen randomly, and the student then gets to choose which language to count in. All students are encouraged to count along.

A few points to consider. Just like in the “Word of the Day” activity, any and all languages are accepted and encouraged. It can be a student who is learning a foreign language who uses this opportunity to practice newly acquired skills. Sometimes it is an ELL student using his or her native language. Be careful not to force the issue. (Some ELL students want to remain anonymous and might feel uncomfortable standing out from other students.) Let them choose to use their native language if and when they want to. Still yet, an ELL student, such as a foreign exchange student, might choose to count in English in order to practice their “new” language. Whatever the case may be, the classroom culture is established with the acceptance of using languages other than English as the norm not the exception.

In addition to including composers and pieces from your students’ backgrounds into lessons and performance repertoire as a method to include and honor diversity, students should also be allowed the opportunity to learn from each other. Another ELL teaching strategy is offering varied learning experiences, both with traditional lecture-type instruction, but also including visual aids and graphic organizers and multiple student groupings. Learning in small groups, such as the implementation of student section leaders is a great way to achieve this. Students often learn best from each other. You may also choose to apply this collaborative language learning when teaching parts of the guitar shown next by Dr. Paz.

Dual Language instruction, also known as bilingual education, is a way of teaching that comprehends the continued growth of a student’s first language, the acquisition of a second language, and the application of both languages to instruct academic subjects.

According with the National Center for Education Statistics in fall 2016, Spanish was the home language of 3.79 million ELL public school students, constituting 76.6 percent of all ELL students. Since the guitar has profound roots in Spain, many of its musical terms are in Spanish. This represents a tremendous opportunity for music teachers to connect the Spanish language with guitar instruction and embrace diversity.

Talking about my own experiences teaching guitar in Arizona and New Mexico, I realized the importance of knowing basic Spanish vocabulary in order to associate with a population of mostly Hispanic students. As a music educator, there is no need to become fluent in Spanish. For teaching purposes, I have put together a very helpful glossary of the most common musical Spanish terms related to guitar teaching:

In sum, a combination of sheltered learning techniques such as the use of visual aids with vocabulary in two languages as shown above, plus the purposeful and thoughtful inclusion of students’ linguistic and cultural diversity into as many aspects of your teaching and classroom environment as possible are all examples of inclusive teaching. These techniques, combined with multiple student groupings, opportunities for collaborative learning, and the many other ELL teaching strategies will help you to better reach your students. When learning is accessible to all, you will find harmony in your classroom. 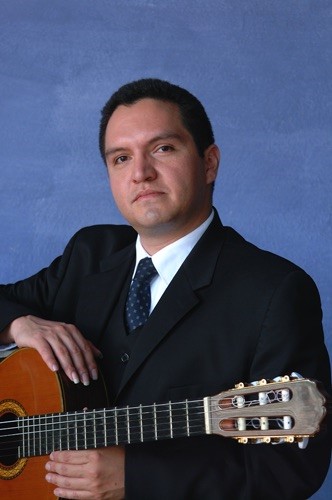 NAfME member and Council for Guitar Education Southern Division Representative, Dr. Ricardo Paz is the Director of Guitar Studies at Capital High School in Santa Fe, New Mexico, and a graduate of Arizona State University. In 2013, Dr. Paz created a very successful guitar program in the Phoenix Elementary School District where he founded the Herrera Panther Guitar Ensemble and hosted the first Guitar Festival where students ranging from elementary to graduate school performed for the community. Born in Mexico City, Dr. Paz started studying guitar at a young age in his native Mexico with Luis Robert and the Argentinian concert guitarist Manuel López Ramos. He studied at the National School of Music of the National Autonomous University of Mexico where he obtained a Bachelor of Music Degree under the guidance of Juan Carlos Laguna. He also earned a M.M. and D.M.A. in Guitar Performance from Arizona State University where internationally acclaimed guitar professor Frank Koonce stated, “Dr. Ricardo Paz is an acclaimed artist and fine musician.” In addition to his career as an educator, Dr. Paz has performed throughout Mexico and the United States, including Weber State University, University of Utah, Brigham Young University, Utah State University, and Springville Museum of Art in Utah, among others. Dr. Paz has appeared on National Public Radio in the United States. Dr. Paz has also been an adjudicator for the prestigious Guitar Foundation of America symposiums in both Phoenix and Las Vegas in the college categories. 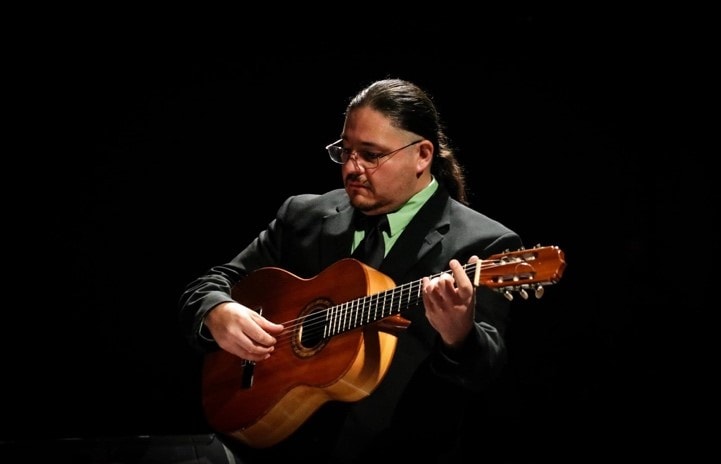 Eduardo Trujillo has been teaching guitar professionally since 2002. While attaining his second degree in music at the University of New Mexico, he became the guitar director at Cibola High School and has been a key faculty member of their award-winning music program ever since (NAMM Merit Award 2015, 2016, 2018). Eduardo Trujillo served two terms as NMMEA District VII Vice President for Guitar. Eduardo has also hosted the NMMEA Guitar All-State Ensemble Auditions at Cibola High School since the dawn of its existence in 2010. In addition to instruction, Eduardo has conducted various ensembles such as the NMMEA District VII Guitar Honor Group. Additionally, Eduardo remains active as a guitarist, both as a soloist and as a member of performing groups in both the classical and contemporary worlds. Eduardo has also recorded two CDs with the progressive rock group In The End and a solo EP, “Mind the Time.”