This article originally appeared in the January 2017 Teaching Music.

“My students learned to play on percussion instruments from around the world, learning the art of Drum Circle Facilitation, which helped them to build the leadership and follower-ship skills as well as become more appreciative of ‘comm-UNITY.’ This experiential learning builds tolerance and appreciation for individual differences. In addition, the leadership training enhances their creative problem-solving skills while honing their ability to work collaboratively in many different settings,” Morris says of her work. She continues, “This not only enhances their understanding of interpersonal relationships, but the skills being developed accelerates their mastery of advanced musical concepts. The design of this program helps them to learn to create their own arrangements, orchestrations, and transcriptions as well as build the confidence required for advanced improvisational skills.”

Morris, who presented a world drumming session at NAfME’s 2015 National In-Service Conference in Nashville, Tennessee, has been a music educator for 20 years.

She began her teaching career in “a young” music department at James Madison High School in Brooklyn, New York, to help build a growth-directed music program. There, she taught Freshman Chorus, Concert Band, and Marching Band, before she was given the opportunity to build her own guitar program.

Once that program was successful, she took on the responsibility of building an orchestra program. In 2008, she was asked to build a World Percussion program and Drum Circle Facilitation program at the College of Staten Island High School for International Studies, where she taught until June 2016. “Through the Drum Circle Facilitation program, the students and I worked to create a local and global community where we would come together to offer Community Drum Circles monthly. We began live-streaming our Drum Circles globally for people in other parts of the world to join in.”

Morris notes that the Community Drum Circle program grew to more 3,500 members in a less than seven years. It was this community outreach that drew the attention of the Global Teacher Prize, a million-dollar prize offered by the London-based Varkey Foundation. She was a 2015 finalist for this prize.

“Classroom climate is everything! Students above all need to feel safe to explore their surroundings and the instruments without fear of criticism.”

Morris also helped expand course offerings at the College of Staten Island High School to include a Guitar and Ukulele Ensemble, which thrived and eventually became a Modern Band Program. In September of 2016 she returned to Madison to continue the school’s musical growth. She is introducing the Modern Band Curriculum to the school part-time, and also mentors teachers in their efforts to globalize their classrooms.

Her teaching methods were noticed by the GRAMMY® Foundation, The Recording Academy, and Converse, allowing her students to record and release a world drumming CD in 2014. She has won several awards, including the Bertelsmann Corporation’s Teacher Award for Excellence in Creativity and Inspiration. Morris has also been GRAMMY Music Educator semifinalist.

Morris says, “Classroom climate is everything! Students above all need to feel safe to explore their surroundings and the instruments without fear of criticism. My best advice to teachers of all backgrounds is simple:

NAfME and the New York State School Music Association have played a major role in her professional development. “I enjoy and learn from connecting with other colleagues around the country and around the world. I believe we all have something of value to share, and exploring other expertise only benefits everyone. NAfME gives us the opportunity to connect with teachers outside our immediate circle. We can become a source of support in various ways for each other.”

Morris also believes strongly that music educators in different parts of the world can learn from one another. “I would like to explore and open a dialogue on the notion of Global Collaboration in a musical setting. With my most recent acknowledgment by the Varkey Foundation’s Global Teacher Prize in 2015, I have discovered that the world has various voids that we can help to fill without leaving the comfort of our own classroom.”

She adds, “With the growing capabilities of technology, we have the tools we need to enhance the learning opportunities of our own students, while at the same time enhancing the experiences of students in other parts of the globe. I would like to challenge my colleagues to reach out to another classroom around the world using some form of video conferencing technology (Skype, FaceTime, Hangouts, etc.). Have your students teach a lesson to students in other parts of the world, and ask them to do the same for your students. The collaborative possibilities are only limited by our creativity.”

Morris also encourages other music educators to share their experiences with her and fellow teachers. “Reach out to me at @Melissamorr1 on Twitter, and I will help you get started if you require guidance. Like U2’s Bono said, ‘Music can change the world because it can change people.’ Our world could use some changing, so now is a great time to start!” 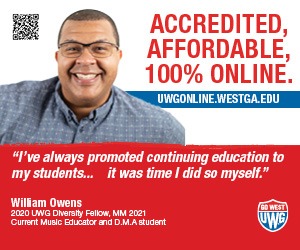