History of the Guitar in the United States

The types of music played by American guitarists of the 19th century consisted of songs with written-out guitar accompaniment and solos belonged to the world of popular music specifically with the Italian Melody. The place of the guitar during the 19th century American music life was to be found within the middle class, specifically among those who could not afford to buy a piano.

The first American guitar methods were directed towards nonprofessionals to let them play easy arrangements of popular melodies of the time and to accompany songs. In 1876, the African-American classical guitarist Justin Holland wrote a very important guitar method titled as “Modern Method for Guitar” which positioned the guitar to the category of an art instrument.

In 1900, the American Guild of Banjoists, Mandolinists, and Guitarists was created by the proposal of C.L. Partee, founder of The Cadenza magazine. In 1904, Partee organized the third American Guild of Banjoists, Mandolinists, and Guitarists in New York which took place in Carnegie Hall with the participation of the America’s leading guitarist William Folden (1860-1947) and Utah guitarist C.D. Schettler (1874-1931). One of Partee’s main intentions for this memorable event was to cause a renewed fascination towards the guitar and to encourage the study of the instrument more profoundly. While these important American guitarists of the time were capable of offering high quality music to the audience, they did not possess a solid guitar technique to cause a deep impression on other musicians.

On January 8, 1928, the Town Hall in New York City became the historical site for the debut in the United States of the legendary Spaniard Classical Guitarist Andrés Segovia. Segovia’s debut success allowed tremendous development for the guitar, and acceptance among other musicians in the United States. Segovia proved to American guitarists the real capabilities of the instrument and stimulated the freedom of the guitar from the American Guild of Banjoists, Mandolinists, and Guitarist’s ideals movement of the time.

The Creation of the Guitar Foundation of America

Even though there were around thirty active guitar societies in the United States that served guitarists in a direct manner locally, there was no national organization for the guitar in the United States before 1972. This situation was resolved with the creation of the Guitar Foundation of America (GFA) which was formally established on September 2, 1973, where Vahdah Bickford served on the GFA Boards of Directors.

Guitar teaching in America was based on sing-strum classes and one-to-one private instruction. It was not until 1981 that the Guitar Foundation of America included a guitar teaching column on a regular basis in each issue proposed by the American guitar educator Robert Mayeur known as “Classroom Guitar Forum.” It was published in the GFA issue Vol. VIII, No.1 February 1981. According with Robert Mayeur, the main goal of this column was to “meet the challenge of bringing guitar teaching standards in line with those of other traditional instruments of our culture.” Unfortunately, this important guitar teaching column lasted for almost four years with the last issue published in the GFA Vol. XI, No. 2 June 1984.

In 1995, during her invitation to the United States to direct the Juilliard Pre-College Guitar Division, the Greek classical guitarist Antigoni Goni stated that in the United States, the guitar does not align to the conventional concept of “Classical Instruments.” She added that many adolescents in the States without any previous classical training, start to study classical guitar too late, while at the same age guitar students from Europe are participating in international competitions.

Current State of Guitar in the United States

A lot of progress has occurred since the 1970s in the number of universities and conservatories that offer guitar college degrees including Doctor of Musical Art Diplomas. This constant development could not happen without the participation of renowned American composers, performers, luthiers, writers, publishers, music stores, institutions, teachers, and students.

In 2016, the Guitar Foundation of America published Prodigies, a magazine for elementary school students.

In 2018, National Association for Music Education (NAfME) presented the first All-National Honor Guitar Ensemble at Disney ‘s Coronado Springs Resort with the participation of more than 32 high schools from 14 different states under the direction of Dr. Michael Quantz. 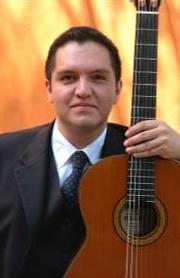 NAFME Council for Guitar Education Member, Dr. Ricardo Paz is the Director of Guitar Studies at Capital High School in Santa Fe, New Mexico, and a graduate of Arizona State University. In 2013, Dr. Paz created a very successful guitar program in the Phoenix Elementary School District where he founded the Herrera Panther Guitar Ensemble and hosted the first Guitar Festival where students ranging from elementary to graduate school performed for the community.

Born in Mexico City, Dr. Paz started studying guitar at a young age in his native Mexico with Luis Robert and the Argentinian concert guitarist Manuel López Ramos. He studied at the National School of Music of the National Autonomous University of Mexico where he obtained a Bachelor of Music Degree under the guidance of Juan Carlos Laguna. He also earned a M.M. and D.M.A. in Guitar Performance from Arizona State University where internationally acclaimed guitar professor Frank Koonce stated that, “Dr. Ricardo Paz is an acclaimed artist and fine musician.”